County Meeting Recap : Why I Care

I had a meeting with our County Supervisor, Steve Kinsey, this past week. It was, of course, mostly about the proposed sidewalk for Evergreen.
During our conversation, I explained that when I first found out about the project, I thought the sidewalk might be a good idea.
But that was before I knew :
- how it happened that a concrete sidewalk for Evergreen could be so far along in the process before we, who live on the street, found out about it
- and before I noticed what it was doing to our community's sense of place and my neighbors' spirit
- and before I realized that most people in our neighborhood don't want this sidewalk.
- and that was before I found out that our street had a 100% safety record
- and before I discovered we live in an area designated as "semi-rural" and our community plan states "...we do not encourage sidewalks, curbs and gutters in the planning area."
And that was WAY before I found out about storm water runoff  -
and that Reed Creek is what they call a "blue line" creek.
- and that the County was trying to skip environmental review...

After about an hour meeting with us going back and forth, Mr. Kinsey said "People adapt to change...They'll get used to the sidewalk." As I left, Mr. Kinsey noted that I have put a lot of energy into this, and he asked me WHY I care so much.
-- I care because it makes no moral sense to take a million dollars from the Safe Routes to Schools fund  - just so a few people in Mill Valley can have a more convenient walk to a yogurt store.
-- I care because it makes no sense to destroy already existing paths to build a concrete sidewalk all along the whole street  -- when clearing a path on a part of the street that has no path will suffice.
-- I care because it doesn't make much sense to change an area of the street with a 100% safety record to be more like an area of a street where there was an accident - especially if the goal is to create a "safer route..."
-- I care because it doesn't seem legal or moral to skip environmental review for "existing facilities" - when no such existing facilities exist -  especially when the "facility" you are proposing to build is going to dump more pollutants into a blue line creek (that contains a federally protected species of fish.)
We should be figuring out how to REDUCE the storm water runoff and RESTORE the creek habitat, not make it worse.
I know I'm not the only one who cares.
I'm just one of the few who hasn't given up yet...

Food for Thought : Ode to the Pothole : Just add "Dirt!"

I watched "dirt! the movie" for the third time this week. I highly recommend it.

An ode to potholes, from my eco friends at Grist: 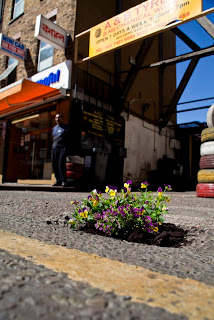 "In the interests of health and safety, if potholes are going to be unattended risks, why not mark them with style like Steve Wheen, London’s pothole gardener? Wheen regularly creates miniature versions of the English garden, adapted to such small spaces with kamikaze grace.
Indeed, make them monuments, green them up — or, more purposefully, fence them off — as yet another pocket of reclaimed guerrilla urbanism. Make those nasty, cordoned-off potholes what they already are: untouchable neighborhood open space, some suitable for dog walk way-stations (with scoopers, plastic bags, and special disposal containers), others for green space with exotic vegetation, or traffic-calming devices of various shapes and sizes.
Such altered potholes could become the new traffic-calming “woonerfs” — those shared spaces in intersections or roadsides borrowed from the Dutch, and already present in some Seattle neighborhoods. Woonerfs make us drive slower, as we must navigate around them to get from here to there, and they are often aimed at increased pedestrian presence on autocentric streets. Think of woonerfs — and the new pothole mini-parks — as Park(ing) Day on steroids.
And that’s the point. Potholes could be permanent, in a good way — which might just accelerate some people’s desired evolution away from the car." (source : GRIST)

Posted by M Tamburo (A Vehicle for Change) at 6:16 PM No comments: